Grails Project: Using Grails as a UI Wrapper to a CLI like SIPP

For many people this project is going to be Easy.  It’s very simple.

The idea for this came from a situation at work.

I am a sole user of a command line SIP/VOIP tool called SIPP.  The tool is incredibly complex. It took me many weeks to get it up and running, but I know it well now and use it often.

However, other members of the team could also benefit form the use of the tool, but some members of the office may not have a computer background, or SSH access to run the command line tool itself.

You may have command line tools you’d like to offload to others, but don’t want them to make mistakes… so maybe using a GUI to wrap up the commands and constrain the options is useful for you as well.

To that end, I came up with an idea to play with a bit of Grails and get a Web Application stood up, that would power the command line tool itself.

The Setup (I wont cover these aspects):

Pulling in server stats via Cacti will be covered in a different post.

This is pretty simple. There’s not much difficulty in this task.
So first things first… we need to know the command line tool parameters.  In my case I’m using SIPP.  The most common parameters I use are:
sipp -s [DNIS] [PROXY] -r [CALLS PER SECOND] -m [MAX CALLS] -sf [SCENARIO FILE] -d [DELAY OF THE CALL]

So I’ll need to make a application that has a form with user selects for those items.  The PROXY in my case is going to be hard coded, as I don’t want people accidentally sending traffic to the wrong IP/Host.

In my case I only foresaw the need for one controller and a couple Views.  If you’re not familiar with MVC, you might want to read up on it a bit.  Basically the Controller will handle logic, the View will be the display/rendering aspect of the app and the Model is the data handling.

So I’m going to make a super easy app that has one controller, and some views.

Let’s launch an IDE to edit this… I  use Spring’s Grails Tool Suite.  I love Intellij, but the community (free) edition doesn’t currently support Grails.  Only the paid ($500+) version does.

Once imported, lets edit the controller.

Go ahead and open that up in the IDE.

Initially I just put in the actual command to dial a number via SIPP.  Then I tested it… it worked… so at that point I replaced all the parameters with values that will be coming from a user Form.  So the action became:

That last bit, [view_data:sipp} is a model I can access in a View or web page.  In a webpage of this app, I can just have ${view_data} and it will reference the output of the SIPP sip call itself.

Now lets go ahead and edit the index.gsp file.  It’s listed in the Project Explorer as: Project Name / Views /

Once that’s open, you’ll notice the basic sample page that Grails creates with each new application.  I removed all the Grails code within the Body Tags and replaced it with a form…. using g tags.

My form is like this ( the Grails tags are highlighted in green):

If done right, this should send the field data to your Controller and Action correctly… which would run the command line with the parameters supplied via this form. 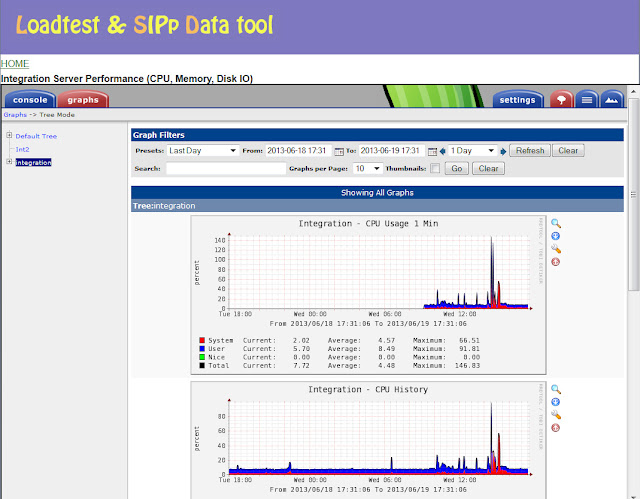 In my case I decided to make another page that would handle the output form the controller.  It’s the same name as the controller.  So in the [project]/views/[subfolder]/callLogic.gsp page I will put some data from the SIPP tool….

I could add ${view_data}, and it would display the output from the SIPP test into the page itself.

In my case, as you can see in the screenshot, I’m pulling in server stats via Cacti.  It’s too much to go into in this blog post, but I set up Cacti on the linux VM here that I’m using, to pull snmp data from the box I’m driving the SIPP load to.

When I first did this, the page loaded fine, but it would wait for SIPP to finish, then output the data to the view.

I now send the call to a background job using the Executor plugin for grails, and using the runAsync closure around the SIPP call in the controller.  This way once a user submits the form they load on the results page.  The data is still being collected and will need to be updated later onto the page (I haven’t worked that part out yet.)

In case you need this, here’s how it works… you do a grails install-plugin executor
After it installs, you can then see the plugin listed in your IDE’s project tree like so: project/plugins.  You can now use the methods the plugin gives access to.

In my case, I just wanted the runAsync method.  so back in my controller I added it like this:

This allows the output to be collected in the background.

The part I haven’t worked out yet, is getting a push or polling mechanism set up to get that data once it’s ready.

Daemonizing It
I wanted to be able to start and stop this thing, so I set up a job in the /etc/init.d/ folder and called it sippgui  in that file is a series of commands, such as:

You’ll want to do something similar to stop it.

At that point it can be added to cron, or run manually with /etc/init.d/sippgui start|stop|restart, etc.

If you can’t get this App to load, you may need to open your firewall to allow traffic to this port (i.e. 8090.)  In my case I couldn’t  use 8080, so I used a non standard port. I had to modify the IPTABLES to allow this.

CENTOS uses IPTABLES so that’s my solution. I won’t go into details on it, just know that you’ll need to open any non standard port and may need to google how to do that on whatever OS you’re using.