NOTE: This is a very old article.  It makes use of simple scripts and Jenkins.  I later built out many better solutions utilizing programming methodologies.  However, this is still a great article for referencing as a start point.  Jenkins in this case was used to kick off various jobs/scripts.  I’ve found it’s much better to build a web application with a GUI that allows user input and stored data.  Much more efficient to build your own web app, which I have various tutorials on throughout this site.

This is a pretty long and detailed (long) blog post.  I’ll try and break it out later to smaller posts. I’ve tried to capture all the details I can, so that anyone can set up something like this relatively easily.

A Tour Around the Framework

My Dashboard looks like this.  I reskinned Jenkins and gave it a bit of a visual polish.  I also added some new links on the left “Get Call Control Logs,” “Latest PCAP,” “Archived PCAP” and so forth.  In the main section the different SIPP preset tests are listed, with their failure/pass criteria.  At the bottom of the main section are some visual Graphs of the SIPP results.

The left nav has the new items mentioned above.  Call Control is a button to grab the logs off one of our servers.  Automation Home, goes to the QA Automation page.  Latest PCAP loads the last Packet Capture done with tshark.  Archived PCAPs points to a repository of PCAPs. 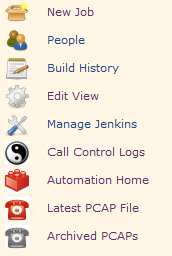 The Main Body lists the jobs for the project.  In this case, “jobs” equates to a preset SIPP scenario with command line parameters.  It also shows the current pass/fail value in the first column, and the history of pass/fails on the far right column.

The bottom graphs are utlizing a plugin to display JPG images. I’m creating the graphs with CLICharts, during the test run.  Jenkins points to these jpg’s via the plugin.

Inside a SIPP Test (or job), I’ve modified it a bit to  have a larger graph, and some useful links. 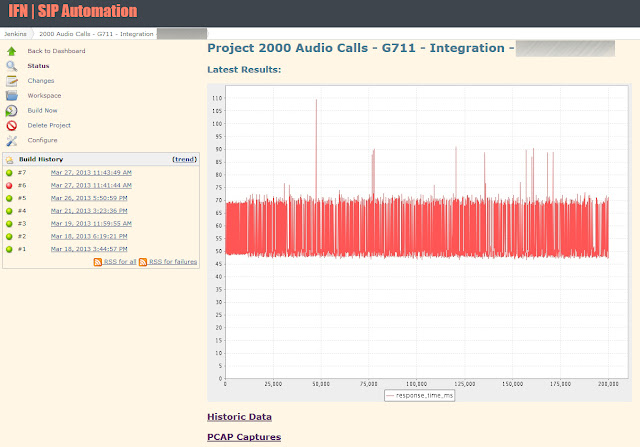 The links are, Historic Data (which is Historic Graph data) and PCAP Captures (historic PCAP captures.) These links basically point to Workspace locations, so Jenkins is already set to show you a file structure like this: 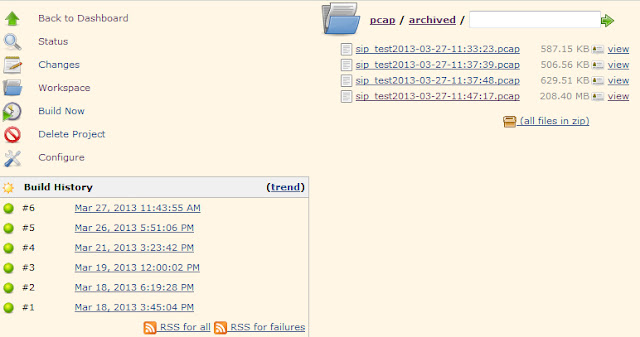 The tools I used were:

I started on Windows, migrated to OSX and finally ended up putting the whole thing on a Centos VM.  OSX couldn’t keep up with the pace of SIPP and performance testing for our needs. I would get spikes.  This could be the machine I was using, but either way I didn’t want the framework to be running on a machine in my office.
I opted for a blade server hosting a Centos VM for me.  It’s very fast and the SIPP performance spikes went down drastically… indicating it wasn’t code related, but test machine related.

I’m using Jenkins CI to maintain all the SIP tests. My reasoning for this was two fold.
To install Jenkins, I’ve installed it on Windows as well as OSX… When I went with the blade install I had our network admin install Jenkins CI there… I’m assuming he did a yum install jenkins  but i’m not sure.
Either way you can find more info on installing Jenkins from: http://jenkins-ci.org/

To install SIPP on CentOS, I just did a sudo yum install sipp
SIPP is a robust Open Source command line tool to generate SIP calls and traffic. It has two main aspects:
SIPP is one of the most complex command line tools I’ve used.  Hence the need to capture the command line params tha tare useful… as there are so many.
Scenario files are just XML files that build packets.  You are litterally building out a packet in XML, and then saying what you expect as a response.
SIPP comes with some default scenario files.  Unfortunatley those scenario files needed to be modified by me to work with our team’s development.  There are certain responses we send, or do not send, that don’t match the default scenario files.
I won’t get into writing your own scenario file, as I think it’s outside the overall scope here of building the framework.  I’ll post more on the scenario file creation in a later post.
For more information on SIPP, check out: http://sipp.sourceforge.net/

To install Jmeter on Centos, I just did a sudo yum install for apache jmeter
I  have a specific need to update my test framework before SIP Load testing… to do this I use JMeter to quickly send some POST or PUTs to end points to set up the data I need. I think this is uncommon for most people doing SIP testing – so I won’t cover this aspect in this post.

To install CLICharts on Centos, I just did the yum install.
SIPP will output it’s performance data to a CSV file, if you choose.  I found a very useful unix tool called CLICharts.  CLICharts will take a csv file and do all sorts of analysis to it.  In my case, I use it to generate graphs at the end of a test. These jpg graphs are put in a folder that Jenkins points to and references with hard links.  This way each test run, updates the Jenkins page with the latest graph of reuslts.
For more information on CLICharts check out: http://clichart.sourceforge.net/docs/quickstart.html

This was a bit different… you need to do a yum install for wireshark-gnome.  That will install a version of wireshark that is usable from the command line (just doing a yum install wireshark will install it in /sbin and not /usr/bin, so you can’t just use it as a commandline)… and of course you get the tshark command line tool.
I use this tool to run during the SIPP test.  Since I know the total duration of a SIPP test, I set the default duration of the Packet Capture to the same duration.  Basically I wrote a shell script that calls tshark, sets a duration, and outputs a file.  The file is also copied to a archive folder and has the date/time stamp added to the file name.  These can be referenced by Jenkins as you’ll see further in this post.

Putting It All Together

So if you have all the tools above installed, lets put it all together and get a SIP Automation Framework up and running!

In Jenkins, install these plugins (SSH Slaves, Sidebar Link, Green Balls, Dashboard View, and if you want to restyle the CSS of your Jenkins, get the Simple Theme plugin.)
Once you’ve installed those Jenkins plugins, restart Jenkins.

Go into Jenkins / Configuration
Scroll down to SSH  remote hosts
Fill this out with the host that is running Jenkins, and you should have sudo access to this box.
You’ll be using SSH to sudo your commands, even though you aren’t “ssh’ing” anywyere, this is how Jenkins will log in as you to sudo commands.

Setting Up A SIPP Job in Jenkins

First, open Jenkins… by default it’s your localhost:8080.
When you have Jenkins up, click “New Job”
Choose “Build a free-style software project” 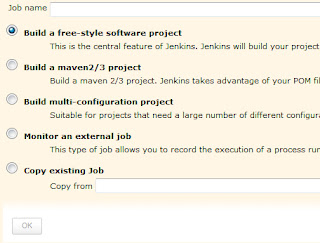 Give the project a name and click OK.
Click “Advanced” button on the Advanced Project Options.
Then check “use customer workspace” and put the path/directory to your sipp scenario files.
Check off “Execute shell script on remote host using ssh”
in the SSH site dropdown make sure it’s the same one you input on “Set Up SSH Slaves” above.
in the Pre build script, type:
cd [your directory to your sipp scenario files]
sudo sipp -s [service/number you want to dial] -sf [path to scenario xml file] -m [amount of calls you want to run] -mi [your ip of the jenkins server (media IP)] -d [pause duration override, if you need it] -trace_rtt -trace_err -stat_delimiter ,
The reason you need to sudo sipp here, is because if you are sending pcap audio, you need to use -mi which creates a live socket. You can’t create a live socket unless you are sudo’d.
If you run this, it should work.

I use a parent project, it kicks off the above as a downstream. Meaning, I have a parent project called “2000 calls @10 calls per min to Integration,” that job just kicks off a downstream job… two actually.  The first is what we just created above (the SIPP job) and the second job it kicks off simultaneously is the tshark pcap capture.  They run at the same time.
How you do this is simple:
On the Server:
create a shell script in the folder with  your scenario files.  Input something like this:
sudo tshark -a duration:201 -w sip_test.pcap
sudo mv sip_test.pcap /var/lib/jenkins/userContent/
sudo chmod 777 /var/lib/jenkins/userContent/sip_test.pcap
sudo cp /var/lib/jenkins/userContent/sip_test.pcap /home/jenkins/sipp-3.3/pcap/archived/sip_test$(date +%F-%T).pcap
Ok, so this script will run tshark for 201 seconds.  My SIPP tests runs for 200 seconds.  it outputs a pcap file to this directory.  Then I move it to my Jenkins UserContent folder.  I change the permissions of this file so it can be read by other users. Finally I copy this file, and change the name of it to a date/time stamp and drop it in an archive.
Update this script to fit your specific needs and directory structure, then run it. Make sure it works.

Back in Jenkins, create a new Jenkins job, just like before.  Give it a name like “Capture PCAP.”  This we’ll run a SSH script just like before. But instead of running SIPP, we’re going to call that shell script (i.e. sudo /somepath/yourscript.sh)
Ok, back at that parent job I just spoke about… remember, the job that just kicks off jobs?  Scroll down to the bottom and click Add Post Build Porcess and choose to build a project(s).  In the field input your SIPP project followed by a comma, and the job you just made to run the tshark script.
Run the Parent job, and verify that you get the pcap in your workspace.

Linking the PCAP to Jenkins

One plugin we installed for Jenkins was called Side Bar.  This lets us make our own Left Nav links.  Go ahead click Jenkins / Manage Jenkins / Configuration and in the section “Additional Side Bar Links” click add.  If you want to use your own icon, use the uploader to upload it. it will by default upload it to Jenkin’s userContent folder.  It will provide you the path after it uploads.
For the Link Text, input whatever you want (I.e. “Latest PCAP File”)
For the Link URL, point to the PCAP file location on your server.

Adding a Downstream Job to do Graphing and Clean Up

Ok, now that you got sipp to work, it should be dumping a csv file to your workspace. Great. lets graph that.

Creating a script to do Charting

Using the process earlier, create another Jenkins job.  This time give it a name like “Graph Data.”  In the job details, check off “Execute Shell script on remote host using ssh.  Make sure the SSH site is correct and in the Pre build script do:
cd [to your directory with the chart shell script]
sudo ./[your chart script.sh]
Save…

Getting Graphs on Jenkins Dashboard

There’s a plugin we installed for Jenkins called Dashboard. if you Edit the View of your Dashboard or Main Tab, and scroll down you’ll see some options for Dashboard Portlets… You can have “top, left, right, bottom” portlets… and one portlet option is IMAGE.  Choose Image and link to the hard link of your jpt graph from clicharts.
Run the Parent….
you should see:
#No Tag